Cooking BBQ is fast and easy with a Masterbuilt Electric Smoker. Here are some tips and tricks to help!


NOTE: This is the final part of a 3 part blog series. If you haven't already done so, you should check out part 1: the perfect pork rub and part 2: explanation of the MES (Masterbuilt Electric Smoker) and AMNPS (A-maze-n Pellet Smoker).

OK, it's now 7am. Now there's nothing to do for 3 hours. If you want, you can spray your ribs every hour or so with a mixture of 3 parts apple cider vinegar, 1 part olive oil. Most people don't bother especially using the common 3-2-1 method which I will be using. I don't bother with spritzing; you probably shouldn't either. 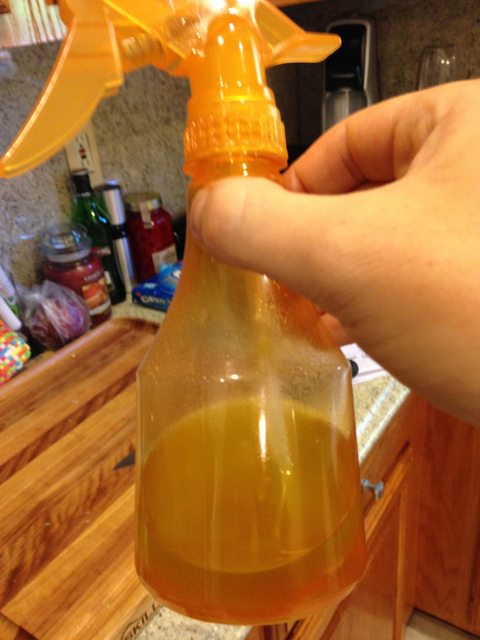 Now time to relax. Have breakfast. What's good on a day full of pork? Sausage, egg and cheese of course! See the apple juice? We'll use that next. Drink most of it, save some. 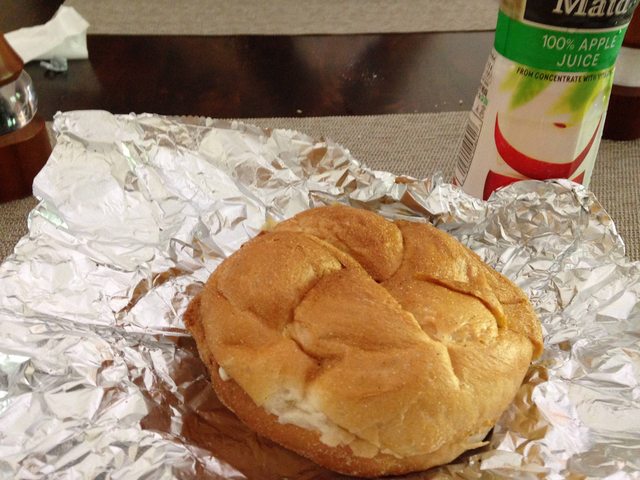 So now we're just chilling out. I actually went back to bed for an hour or two.* Then I went to check on the baby bunnies that are living next to my central AC condenser unit. (NOTE: Again, use common sense, the MES is basically set it and forget it, but please don't burn your house down.) 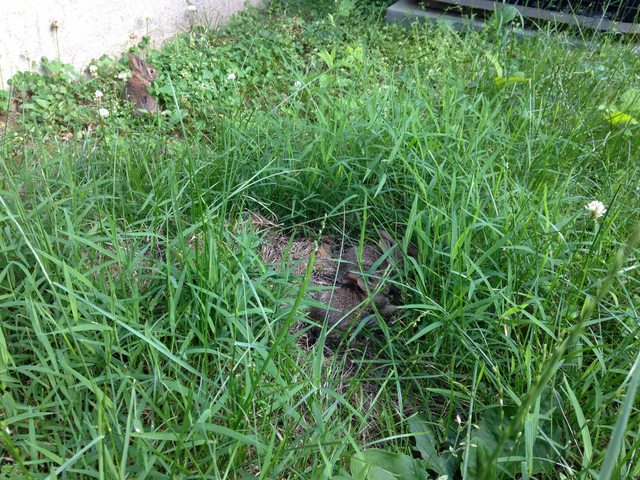 Now it's 10am. It's been 3 hours. (the 3 in "3-2-1 ribs") Take the ribs off the smoker, bring them inside. Wrap them in foil and pour some of the aforementioned apple juice into the foil pouch to keep 'em extra moist. They'll steam and get nice and tender in their little pouch. Leave the pork alone. You can spray it with the cider if you want, it doesn't do much to it though and again, most people think spritzing is a waste of time. Throw the ribs back in the smoker and wait... you guessed it, two hours. Then bring the ribs back inside and unfoil them and they'll look like this. 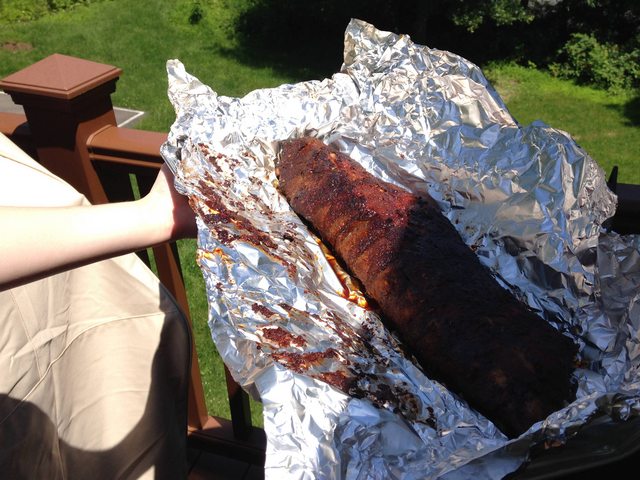 At this point, they're safe to eat and will taste delicious, but for maximum deliciousness, complete the 3-2-1 method by putting them back in for a final hour, unwrapped. I like to dust them with a tiny bit more rub here, some people say don't. Oh, by the way, it's finally noon! it is now socially acceptable to begin drinking! Beer and smoking go together. It's science. I started the day with a nice 7.2% DGF to catch up on lost time. 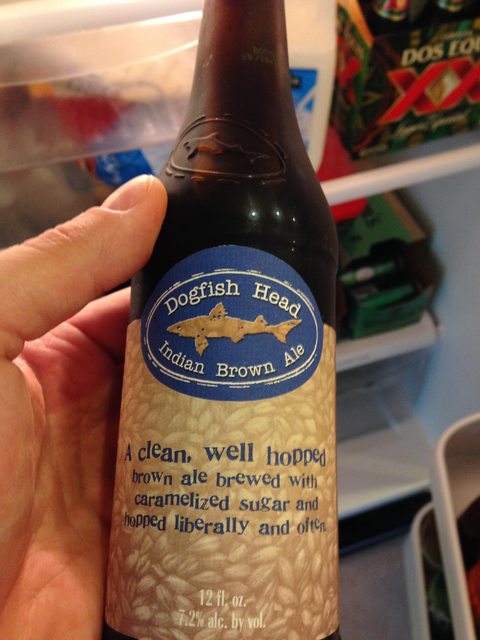 After the final hour, get the ribs out of the heat and put them in a pan to rest for 5-10 minutes. They don't need to rest for very long. You know they're done when they bend easily and the meat starts to retreat from the bone. (You can see it on the bottom there). This "meat pull back" is much more pronounced in ribs that are cut "St. Louis style" vs these "baby back/loin cut" ribs. Some people do loin/baby back ribs 2-2-1 vs 3-2-1, I like 3-2-1 for baby back ribs and about 3-2-2 for St.Louis. They will NOT turn to mush with extra time! (unless you do like 5 hours of extra time or something crazy). They may be slightly more dry, but still 100% acceptable. 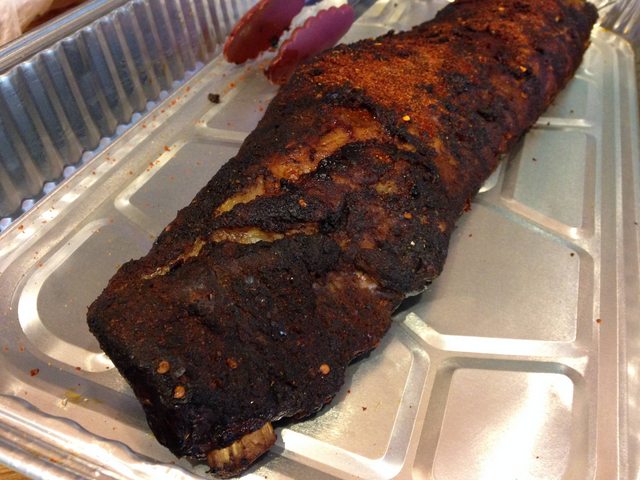 When you're pulling the ribs off for the final time to rest, take a peek at your pellets. In the photo below, we're at 6 hours, we're about 50% done. Perfect. We won't need to reload at all today! Certain pellets will burn faster or slower and some windy days will get extra airflow and increase your burn rate, but as a rule of thumb expect 10-12 hours of smoke. 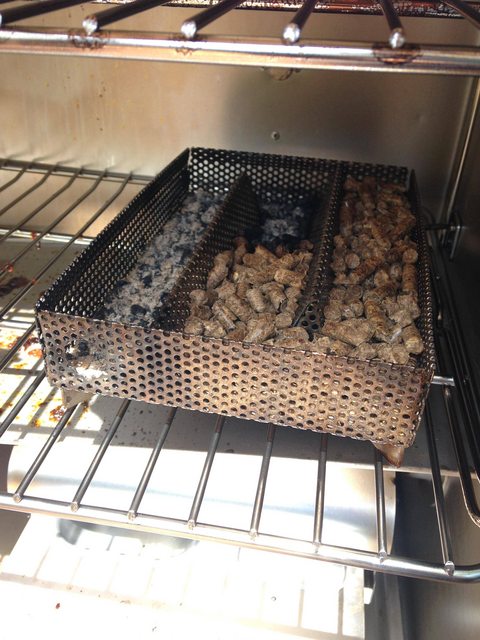 5-10 minutes is plenty of time to rest, in my opinion. Some say rest 30. While it rests, boil some potatoes and mash 'em. Slice the ribs up into 2 rib portions. 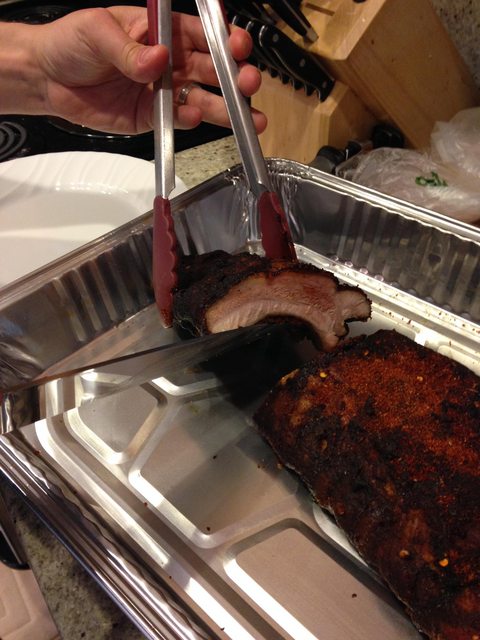 Note: these ribs will be super tender but not "fall off the bone" tender. You don't really want fall off the bone tender here. They should be eaten ON the bone, not with a fork. Save that for pulled pork. If you want super extra tender, keep 'em cooking for a bonus hour, they won't dry out too too much thanks to the low heat and then they will be "ultra tender". Anyway, it's like 1:30 now. Time to eat lunch. 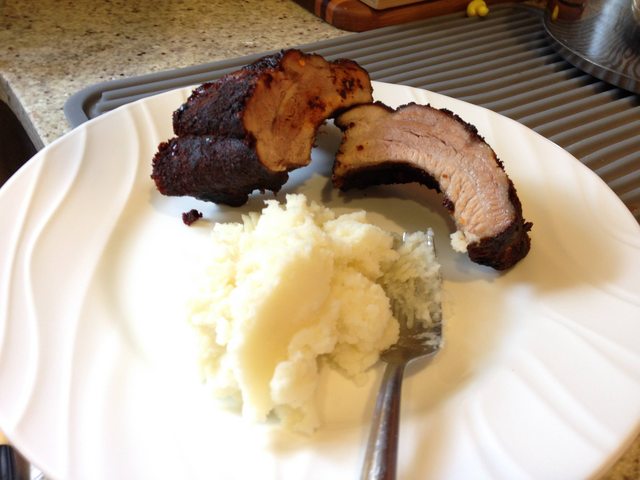 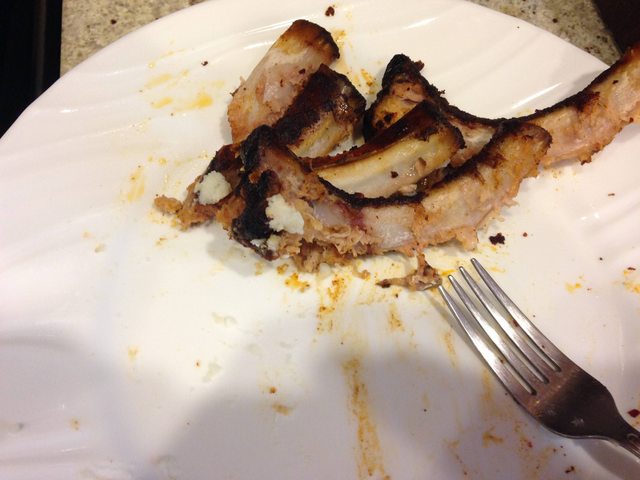 At 6 hours, you should be into "the stall" on your pulled pork. The stall refers to a point at which the internal temperature of your meat will stop rising at a certain point for HOURS at a time. This occurs at about 155 degrees. Basically, at this temp, the juices start to rise to the top and keep the meat cool like sweat on a hot day. You will get stuck hopelessly at ~160 degrees and you'll think your thermometer is broken. It's not. 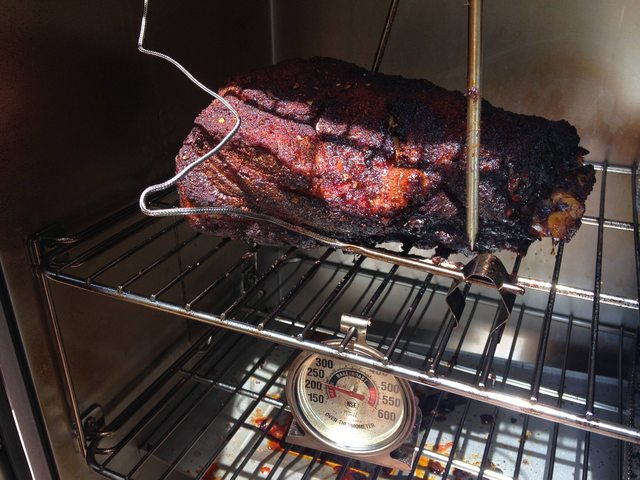 You have 2 choices here. You can remove the pork and wrap it in foil or just wait. Wrapping it in foil (sometimes called "the Texas Crutch") is faster but will have a bit less flavor (it won't absorb smoke flavor with the foil on) and foil also makes the crunchy bark a bit mushy. It'll still be yummy though. Since I have all day, I'm not foiling. #YOLO. Aaaaaand we've made it past the stall!!! Now we just have to wait 'til it reached an internal temperature of about 185-190. Some say you should go as high as 200 or more. But without that Texas Crutch, it will take close to 15-16 hours or more and you'll risk being dry at that point. 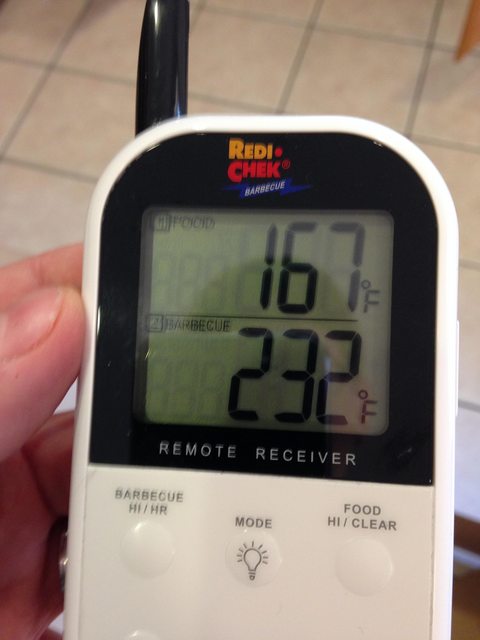 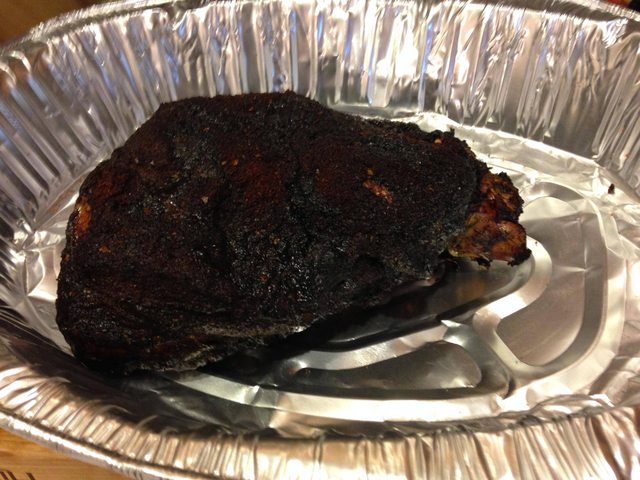 After giving it 30 minutes to 1hr of resting time, it's time to pull it. After you break up the bark and break the meat into 3-4 large pieces, with only a little bit of effort, you can likely pull out the big bones. (One bone with a butt or two with a shoulder/picnic) They should come out nice and clean. 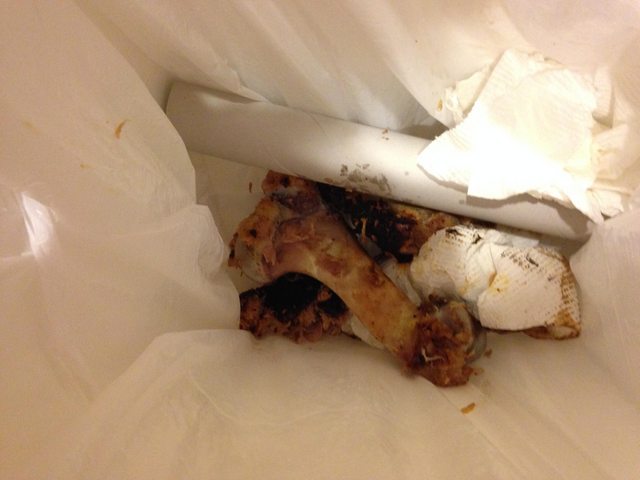 Now you pull the pork. You can use 2 forks or "Bear Claws". Bear claws make it easy. They also double at easy ways to lift meat in and out of the smoker. They're a good investment for BBQ'ers. 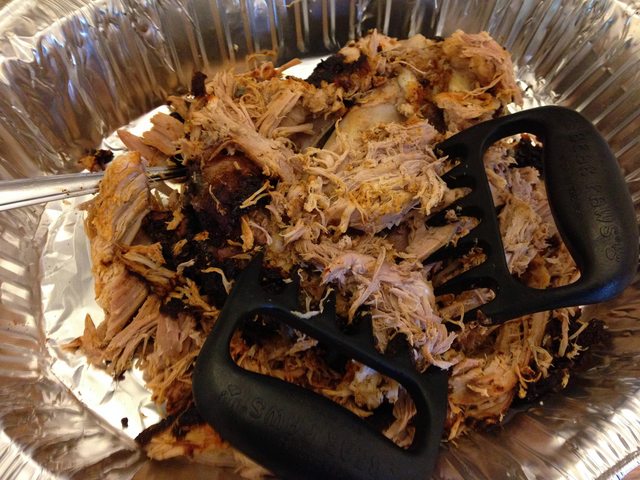 Now you just need to mix it all up soaking in any juices that might have leaked out during rest and pile it high on a bun of your choice. I like potato rolls. Serve it with optional addons, like bbq sauce, pickles, pepperjack cheese. Don't slather the sauce on yourself. It'll detract from the flavor you spent so long developing. You probably won't need any sauces at all! This pork is super flavorful and shockingly moist for meat that has spent nearly 11 hours cooking! Enjoy your delicious pulled pork sandwiches.

As far as leftovers? What leftovers?! If you must, you can easily refrigerate whatever hasn't been devoured. They'll keep about 3 days in the fridge and 3 days in the freezer. To reheat, put it in a bowl with a wet paper towel on top to ensure it stays moist. And that's it. The Masterbuilt Electric Smoker and AMNPS put out some great barbecue without too much muss or fuss. I highly recommend them!